Art is a Dynamic Relationship with the Environment Featured 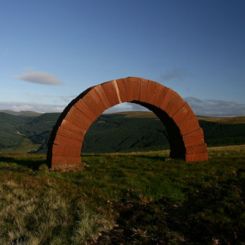 A quiet region of Scotland is building a reputation (and tourism) through art that connects nature and community.

When I heard about the Environmental Art Festival Scotland (EAFS) it stuck me as curious that this was the first time that there had been one. After all Scotland's environment has always been important as an inspiration for artists, writers, composers, scientists whether that's Edwin Landseer, Margaret Tait, Robert Burns, Hugh McDiarmid, Felix Mendelsshon, Martyn Bennett, James Hutton or Patrick Geddes.

The landscape is rich in folklore and mythology and articulated by prehistoric monuments and signs of thousands of years of inhabitation. In fact even the word 'environment' was coined by Thomas Carlyle when he was living in Ecclefechan in 1828. 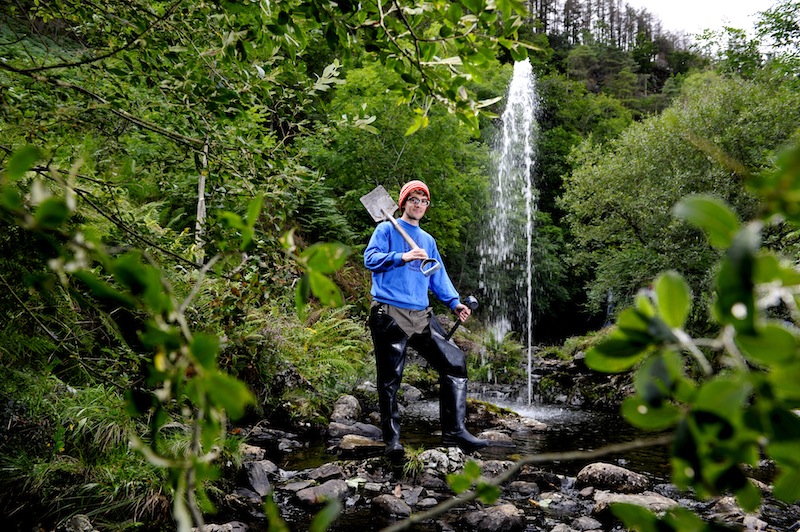 Scotland's landscape has been a focus for tourism since Boswell and Johnson's visit to the Hebrides in 1773, but it's also a contested space, particularly in relation to the emergence of capitalism over the last three hundred years. The Highland Clearances into Scotland's cities and to the colonies of the Empire are well known, but the equally significant Lowland clearances affecting areas such as Dumfries and Galloway are less thoroughly embedded in the national narrative. This complexity is alluded to by one of the EAFS commissioned projects, James Winnett's 'The Rise and Fall of the Grey Mare's Tail,' a new temporary fountain inserted into the sublime landscape of the Moffat Valley (rather than a formal garden landscape).

Land Reform legislation enacted immediately after devolution at the beginning of the noughties is beginning to redress some of the long-standing injustices. Community buyouts of estates on the islands enabled by this legislation are demonstrating new, more sustainable ways of living in remote and rural contexts. In fact there are lessons to be learned by urban communities from what is happening on the edge of Scotland, not least EAFS itself, developed by grassroots artists and organisations operating in a corner of rural Scotland, as Matt Baker said, 'on the periphery of the periphery.'

Visual artists and curators in Scotland have been mining a seam of 'identity' and 'place' for a long time and a new generation started around the time Glasgow was European City of Culture in 1990. It's been a rich and fruitful territory which has put Scotland on the international contemporary art map, but has also resonated in places across Scotland, in small communities and large cities alike.

We can say that the Environmental Art Festival Scotland is happening this year because it is the Year of Natural Scotland. The Year of Natural Scotland is part of the Scottish Government's programme of annual themes (homecoming, creativity, nature and next year homecoming again). Whilst a simplistic analysis might see this as simply a national-scale tourist initiative, it has resulted in an important profiling of art and artists who have been working with nature, environment and ecology for many years. In addition to the Environmental Arts Festival Scotland, there has been a grant scheme supporting arts projects focused on the Year of Natural Scotland and an innovative interdisciplinary development programme called Imagining Natural Scotland, bringing into sharp relief the ways in which cultural production and, in particular, film, constructs and reinforces the way we see the country. EAFS sees itself building on a local legacy perhaps going back as far as the Colourists associated with Kirkcudbright, certainly the Moores, Rodin and Epstein sited in Glenkiln and more recently the works of Andy Goldsworthy who is local to this area. 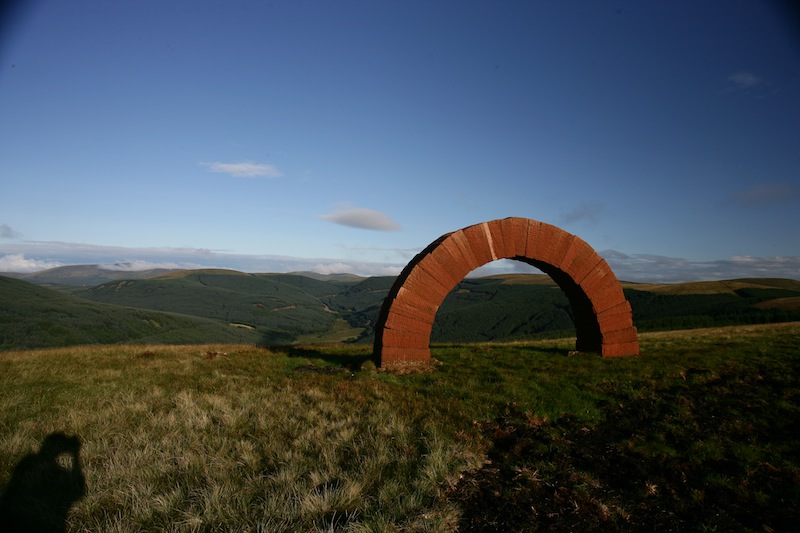 The incomparable Scottish artist George Wyllie (1921-2012) said, 'Art is too important to keep in galleries.' and this phrase has clearly resonated with the organisers of the Environmental Art Festival Scotland (three organisations based in Dumfries and Galloway: Wide Open, Spring Fling and The Stove). Their ambition has been for the art to be a catalyst for connecting people. None of the core programme elements are presented in conventional art spaces (galleries and theatres). The work is distributed over the large rural and coastal landscape of Dumfries and Galloway in the South West corner of Scotland. Debates have taken place in village halls and heritage centres.

The Festival, focused on four days over a weekend (with a satellite programme running over a month), combines installations and video projections alongside nightly debates and events. The organisers recognised from the outset that there would be more interesting proposals than they could commission, so they invited a wide submission of ideas on the theme of 'land and energy.' A selection of these formed the material for a four day performance by the Archivist – a modern antiquarian with a trunk full of creative ideas. Perhaps a bit like Allan Kaprow's* performance, 'A Gallery in a Hat', you pick something out of the trunk and the Archivist tells you a story. 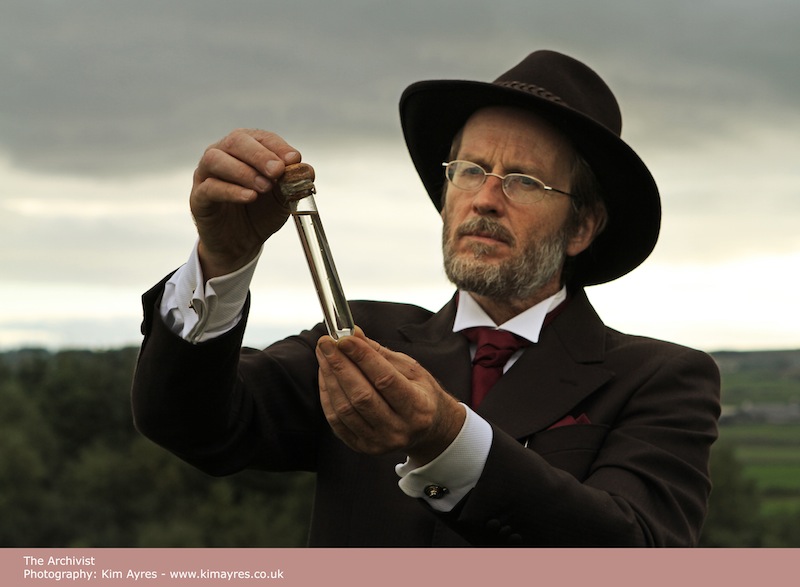 If one dimension of the programme is inspired by the idea of happenings, of art and life blurring, then there are also aspects of the programme which draw on critical regionalism.
You first come across this when you pick up the programme – this unfolds into a poster incorporating several map layers – one for the art, one for context and one for the topography. The map enables a complex reading of the landscape encompassing the flows of peoples (incoming Vikings as well as outgoing rural populations displaced to the colonies). It also indicates the use of the landscape by the military and for energy production including both opencast coal and wind-farms. Landownership is indicated – Buccleuch Estates, head-quartered outside Dumfries, is the largest landowner in Britain. It's a subtle hint towards that key issue of land as capital.

Cinema Sark, one of the four commissioned projects, is another form of critical regionalism. This compelling video installation which you watch standing on the Sark River footpath as it passes under the nine-lane M74/M6 Motorway. Trucks thunder overhead. You are standing on the Scottish side of the border. The other side of the river is England. It's a remarkably good space to experience a four screen exploration of the many aspects of the watershed – geography, ecology, history, economy including food production, and tourism. The four screen projection is controlled by an environmental monitoring system meaning that the experience is never the same twice. As Robert Smithson said, 'Nature is never finished.' 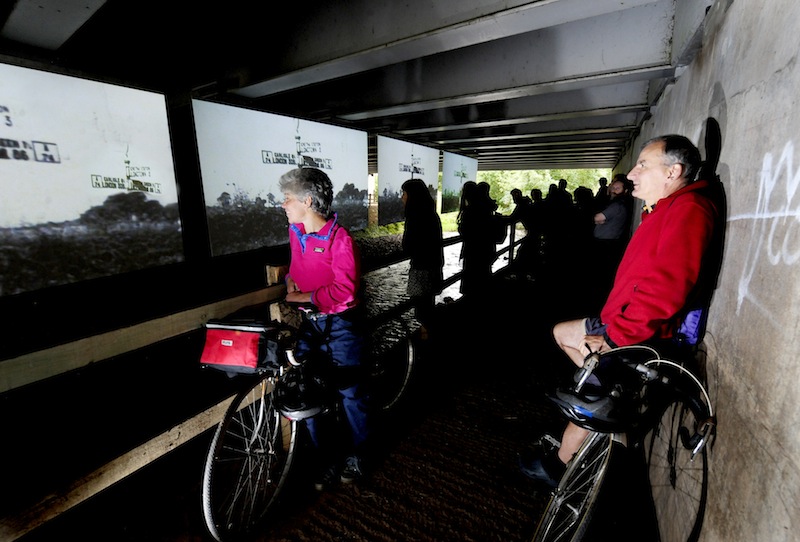 Environmental arts are almost always dependent on working with others. Sometimes this is called a collaboration, such as with 'Cinema Sark' where the video artist John Wallace and Royal Society Wolfson Professor of Soils and Global Change, Pete Smith, clearly worked together to develop and structure the work. Likewise the video based on the 'Do Not Resuscitate' programme of art/science collaboration around climate change and the model of Cecil Balmond and Charles Jencks' Gretna Landmark both highlight important collaborative developments taking place in the area. 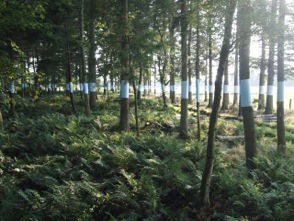 In other cases working together can be about more straightforward acts, such as allowing artists to do something. Will Levi Marshall and Donald Urquhart's piece, 'Glimpse,' is a collaboration between two artists, but it needed the Barony College to give permission for the artists to create a visual slice through an area of coniferous woodland. The staff at the Barony not only gave permission, they also stripped off the dead wood and twigs to make the artists' lives easier when they came to install some two hundred pieces of watercolour painted paper around the trunks of the trees. From the A701 Moffat to Dumfries road, the sense of an incongruous line of light separating the trees from the ground disrupts what is an otherwise everyday scene of plantation woodland.

There is a strong sense, evident not least from the numbers of people attending events and participating in activities, that the environment really matters and that art can offer ways to catalyse discussion and debate, as well as offering new experiences. The organisers have worked with Creative Carbon Scotland and the locally based Crichton Carbon Centre to track the carbon footprint of the Festival, but the concerns, particularly of the core community attending the debates, were deep and knowledgeable.

Working together across disciplines, practices and experiences about how to make the land (not the visual landscape, but the lived upon land) in the context of global and local environmental change is at the heart of the first Environmental Art Festival Scotland. Thinking about the future, such as through the work 'Gimme Shelter,' which asks visitors to contribute to an imagined restoration of a ruin in 2513, or through Charles Jenks' 'Garden of Cosmic Speculation,' is another important theme. We can hope that not only is there another festival of this quality in two years' time, but that also the connections and interactions evident now, continue to grow and strengthen. This festival isn't a 'woolly tree-hugging pretty things in nature' Environmental Art Festival. It's a complex and multi-faceted event that engages with the sharp issues and is endlessly rich in nuances. It certainly makes the case that if you are interested in art in nature, in the environment, or within ecosystems, you should keep an eye on Dumfries and Galloway.

*A note from the author:Chay Allen has suggested that the "Gallery in a hat" may be a work by the artist Robert Filliou rather than Allan Kaprow.  My association of this work with Allan Kaprow comes from a reference made by a contributor to Suzanne Lacy's Trade Talk participatory project for the retrospective of Allan Kaprow's work at LA MOCA. The exhibition website is no longer on line, but given the tenuousness of my association, I suspect Chay might be right. April 2015

Chris Fremantle is an independent researcher and producer. He chaired the EAFS Gathering #4 Landscape as Resource: Why Environmental Art? He is co-producer of Scotland's national public art development programme and contributes to Edinburgh College of Art's MFA Art, Space and Nature. He is currently working with Wide Open and the Crichton Carbon Centre on Nil by Mouth: food, farming, science and sustainability.

More in this category: « The Funeral Blanket Artists' Practice and Creative Development »
Login to post comments
back to top