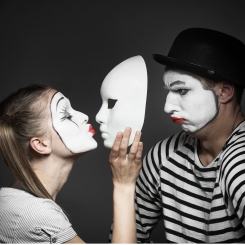 Over time, there have been many debates about the paradoxical relationship between the real emotions of actors and the emotions that a character should express on stage. Diderot's Paradox (Diderot, 1830) has been and continues to be the basis for a dispute in which opposing views are present: on one hand, there is the view of those who claim that the actor himself must experience the emotions he expresses on stage; on the other hand, there are scholars who oppose the idea that the actor experiences and expresses the emotions of the character.

First, Diderot argued that a good actor does not feel anything and that is why he produces the strongest reactions in the audience. A sensitive actor could not interpret the same role, with as good and as successful a performance. Moreover, Diderot (1830) states that there are so many varied and complex situations in one major role, that it would be impossible for the actor to be able to know and experience all of them. An extreme sensitivity on the part of the actor would have negative consequences on performance; people expressing many emotions only serve as an example for great actors in the light of a modèle idèal.

More in this category: « The impact of the Mozart effect on creativity: myth or reality? The Nature of Creativity in Craft: Insights from Easter Egg Decoration »
Login to post comments
back to top

But don't be satisfied with stories, how things have gone with others. Unfold your own myth...