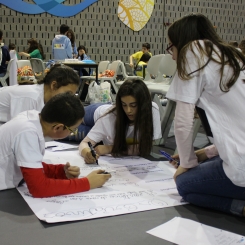 The Future Problem Solving Program International (FPSPI) is one of the most popular internationally implemented programs to promote creativity, problem solving, and future interest and orientation in adolescents. However, a recent evaluation of the program found that students reported that they gained other lifetime skills, beyond the program’s goals, in personal, academic, and career experiences (Treffinger, Selby, & Crumel, 2012). But, does the FPSPI help students have accurate perceptions about creativity, and about the concepts of a creative pupil and a creative teacher? It is assumed that having accurate perceptions of creativity fosters a personal investment in creative skills. So, the purpose of this study was to examine the impact of the FPSPI on adolescents' perceptions of creativity and creative people in the school setting. The intervention program was administered to 77 students, who ranged in age from 12 to 17; the control group included 78 students with equivalent characteristics. In pretest and posttest assessment moments, students completed the scale Creativity and School – Perceptions of Students (Morais & Azevedo, 2011), composed of 25 Likert-type items organized into the dimensions of Accurate Perceptions and Erroneous Perceptions about creativity. Results show statistically significant differences between the experimental and the control group for accurate perceptions of creativity, which are favorable to the experimental group. These results are discussed in order to plan future research with the FPSPI, and to consider educational implications.

In recent years, creativity has become more and more recognized as an important part of our daily life. Given the circumstances of change, celerity, and unpredictability that life in today's world entails, creativity is accepted as a crucial skill in different domains (Lubart & Zenasni, 2010; MacLaren, 2012). Along the same lines, nowadays creativity is assumed to be a complex and multifaceted phenomenon, expressed at different levels and in the most diversified fields of human activity (Kaufman, 2009; Runco, 2007).

Although creativity is widely recognized as important now, there is still a multiplicity of definitions, explanatory models and controversies involving this concept (Lubart, 2007; Starko, 2010). Hence, it is easy to understand the proliferation of inaccuracies concerning the perceptions of this concept. Because creativity is complex and largely ineffable, myths and erroneous perceptions abound about it (Sawyer, 2006; Weisberg, 1987).

Perceptions are subjective conceptions concerning reality, which explain the understanding and the assessment that each individual has about that same reality (Moscovici, 2003). Considering that what one thinks conditions how one behaves, if such perceptions do not correspond to an accurate concept of creativity, they may lead to undesirable consequences at a personal or a social level. This may happen predominantly in relation to the investment that each individual and each society will make in the development of creative skills. A good example of this is the fact that creativity is very often mistaken as the result of a sudden and inexplicable inspiration. Such a perception leads to a passive and conformist attitude, opposed to the predisposition to develop the creative potential that is inherent in human beings (Craft, 2005; Runco, 2004). Indeed, many empirical studies reject such a myth, emphasizing the impact of effort, persistence and time that creative ideas require (Kaufman & Baer, 2006; Sternberg & Davidson, 1995; Weisberg, 1987).

Moreover, this belief of creativity as the result of sudden inspiration leads to a more or less explicit understanding that being creative is an equivalent of genius (Beghetto & Kaufman, 2007; Weisberg, 2006). Nonetheless, even those authors who have studied high creativity or socially recognized creativity (e.g.: Simonton, 2006; Weisberg, 2006) do not deny the pertinence of everyday creativity, which is important for recognizing the creative potential in everyone and the ways it can be strategically improved (Craft, 2007; Runco, 2006).

This point is important in considering the common elements in most definitions of creativity, which entail not only originality or uniqueness, but also usefulness, efficacy, adequacy or intentionality (Lubart & Guinard, 2006; Runco, 2004). The latter qualities not only enhance the value of originality, but also require the effort, time, and elaboration without which the efficacy of the original idea may not be realized.

Another common misperception is evident in the privileged association between creativity and the arts (Jeffrey & Craft, 2007; Oliver, Shaha, McGoldrick, & Edwards, 2006). Such a perception may disregard the importance of creative ideas in other fields, such as scientific research, mathematics, human and social sciences, leadership, or even sports, for instance. This perception of creativity as unique to the arts may dissuade able students who value creativity to avoid a career in those fields, or, equally problematic, lead those who value those fields to devalue creativity. Opposed to this arts perception, nowadays creativity is seen as an advantage in any domain of expression, from a more academic trajectory to a professional life (cf. Craft, Jeffrey, & Leibling, 2007; Fautley & Savage, 2007; Fisher & Williams, 2009; Oliver, Shaw, & Wisdom, 2006).

These erroneous conceptions associated with the construct of creativity occur often in educational settings as well. A particularly common myth is that being creative may lead to undisciplined, antisocial, or even crazy behaviors that are hard to handle (Beghetto & Plucker, 2006; Cropley, 2009). Moreover, a few of the characteristics that define creative people are very often unwanted and even censured by teachers, such as questioning, divergence from what is traditional, or the tendency to take risks (Morais, 2013; Runco & Johnson, 2002). In reality, the expression of creativity does not necessitate inappropriate behavior, at least not at the level of daily creativity. Creativity may, in fact, catalyze sound and adapted motivations and behaviors (Lucas, 2007).

Still, in regard to students, there is some misunderstanding concerning who is creative and who shows academic success or competence in tasks that imply reasoning (Dawson et al, 1999; Proctor & Burnett, 2004). The concept of the creative teacher is also sometimes surrounded by inaccurate and potentially harmful beliefs, some of which may derive from the myths mentioned earlier. One example is the confusion that some people have between a teacher who is personally creative and a teacher who promotes creativity: the latter is not necessarily the one who produces the most creative idea, but the one who knows how to promote creativity in pupils (Lucas, 2007).

If such perceptions about creativity can restrict educators' efforts to boost creativity (MacLaren, 2012; Runco, 2007), their revalence in students should not be overlooked either. Having a clear conception of what is and what is not creativity may help to improve self-knowledge and consequently inspire more appropriate choices (vocational or professional, for instance); it may also increase the investment that each student could and should make in his/her creative potential. This way, it seems relevant to understand not only how students perceive creativity, but also how accurate and proactive beliefs concerning creativity can be stimulated while erroneous or ambiguous beliefs are replaced or clarified (Beghetto, 2007).

When speaking of the promotion of accurate beliefs concerning creativity, one assumes that creativity is susceptible to stimulation and growth. Although not everyone agrees with this assumption, as pointed out by Cropley (2009) or Sawyer (2006), several authors agree that creativity is an ability susceptible to being perfected through practice (Halpern, 2003; Plucker, Runco, & Pritzer, 2011). This perspective gives emphasis to Runco's (2006) assertion that someone who is provided with the skills necessary to upgrade his/her reasonably creative potential will show a greater performance than someone with a higher creative potential that has had that potential neglected.

In line with this pro-action sense regarding creativity in educational settings, several techniques and training programs have been undertaken, such as the Future Problem Solving Program International - FPSPI (Torrance et al, 1978), which will be under analysis in this paper.

More in this category: « Extinction: A Power Tool to Source New Ideas The Kinetics of Inspiration: Accelerating Your Personal Creative Process to Solve Persistent Important Problems »
Login to post comments
back to top