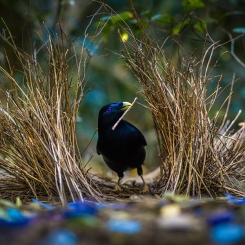 Most people create through the manipulation of mental images. Presented here is a technique to discover appropriate initial images, through a process that can yield fruitful solutions to difficult and persistent problems that refuse to be solved in other ways.

Increasing the number of exciting ideas and solutions you can create, and put to use, is a function of two states: readiness to be inspired, and understanding what it takes to capture inspiration. This article will introduce techniques to help with both the preparation for, and recognition of, great new ideas. When you are inspired, you often feel you are not in full conscious control, but rather are being ‘fed’ ideas from an external source. But there is a rational structure at work underneath inspiration – one that can be understood and mobilized for augmented creative output.

It has long been observed that the macro process of creative problem solving involves four stages: Preparation, Incubation, Illumination or Inspiration, and Verification (Wallas, 1926). In Preparation, the problem solver gathers information and tries to resolve the issue using methods and ideas that are familiar. When these prove unequal to the task, because of the problem’s added complexity, newness, or unique challenges, the problem solver enters the Incubation phase, leaving the problem alone and doing some other activity, leaving things to the subconscious and dropping his or her focus on the problem. Incubation leads to Inspiration (also called the Illumination phase) in which, as if out of nowhere, the new idea presents itself (this process can take moments, days, weeks, or even years - the subconscious does not respect deadlines). Finally comes the Verification phase, where the creator crafts the new insight into final form for implementation.

The full creative process may take days - or years. Can it be streamlined? A couple of measures can be taken to quicken the process: First is to condense the Preparation phase to create receptivity to a great new idea more quickly... Second is to truly appreciate what mental events occur within the Aha moment of Inspiration in order to leverage its workings to best advantage for maximum efficiency.

To accelerate Preparation, we must prove to ourselves that the old ideas and habitual pathways to solutions do not work. We do this by giving ourselves negative feedback about what we have previously considered. This concept was elegantly proposed by Robert Weisberg, Professor of Experimental Psychology at Temple University, in his work with graduate students. Over six years, Weisberg gave students the famous ‘nine-dot problem’, then observed them trying to solve it. If you haven’t seen this problem before, it seems almost impossible to resolve. We are presented with a 3 x 3 matrix of 9 dots on a sheet of paper. The problem is to touch all 9 dots with 4 straight connected lines without the pencil leaving the paper.

The solution involves going outside the matrix boundaries. Of course, these boundaries are imposed not by the problem itself, but by the problem solver. The results Weisberg reported transformed my understanding of the creative process. He concluded that the students were unable to venture outside the lines until they had guaranteed themselves that they could never solve the problem by staying inside them. Weisberg then went on to study the inventions, theories, and works of art by creative icons across a host of fields. He discovered that the same mechanism was operative as for his students. He reported, ‘Novel solutions to problems come about in an evolution as one gradually moves away from the conceptions with which one began. This incremental process is set in motion by negative feedback demonstrating the INADEQUACY OF INITIAL THOUGHTS AND IDEAS’. (Weisberg, 1988).

Recently much has been written about the usefulness of negativity to clarify and improve problem solving and decision making. Neurobiologists, pinpointing brain circuitry, discovered that the way to form good habits and break bad ones is through negative feedback. It also sharpens logic and improves decision making. Adam Grant wrote a wonderful summary in a New York Times OpEd (Grant, 2017) on the power of negativity called ‘Kids, Would You Please Start Fighting?’ Even Pixar (Disney Films) produced a film called ‘Inside Out’, ostensibly for children, where good and bad feeling centers in the brain were animated to demonstrate the same operating principle. So be generous in conceding failure, focusing only on what is BAD about your previous attempts at problem resolution. Record all your failed attempts or thoughts about resolving your problem. Here you never have too much information. Summarize these into one sentence or phrase. What is the idea you feel most negative about that is representative of your summary?

Now you are primed for inspiration.

More in this category: « Future Problem Solving Program International and Creativity Perceptions of Adolescents Design Like a Child: A Study on Creative Ideation Games Evoking Playfulness, Recklessness, and Humor »
Login to post comments
back to top