Getting Creative to Promote Science and Engineering Careers 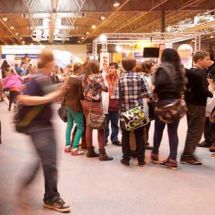 What do you get if you pack the 02 Arena three times, sell-out the Albert Hall ten times over and fill White Hart Lane with young people? The number of people who were entertained and inspired by their attendance at The Big Bang UK Young Scientists & Engineers Fair in its third and record year.

On 15 - 17 March The Fair burst into life at The NEC, Birmingham, making the programme’s flagship national event its biggest and best yet. With over three days of wall-to-wall science and engineering shows, activities and workshops, The Fair attracted 56,000 visitors, with young people, their teachers and parents totaling 49,000 – almost doubling last year’s impressive numbers.

We are going to need over two million additional engineers to meet demand by the time today’s primary school pupils are of working age. Sobering facts like this help to underline exactly why The Big Bang Fair, and its wider programme, is so important. The engineering community, in its widest sense, must do everything it can to make sure that children, parents and teachers understand the world of opportunity that physics and mathematics can open up - these subjects are a must for most engineering careers.

The Big Bang Fair is a unique example of what can be achieved by collective passion and commitment. This year The Fair brought together over 170 organisations to let young people see for themselves the vast range of exciting opportunities available through science and engineering careers, representing an unprecedented partnership between Government, education, industry and the wider science and engineering communities.

Fish where the fish are swimming

We have spent a year of planning, preparing and promoting the careers messaging central to The Big Bang. The Big Bang rightly puts young people at the heart of what it does and engages with young people on their home turf. ‘Fish where the fish are swimming’ is a well-worn Big Bang phrase. The build-up to The Fair ensured that its important science and engineering careers messaging reached far and wide through media and our social media, regardless of whether you could make it to the event. Over 8,000 young people, their teachers and parents now ‘like’ us on Facebook and The Big Bang Fair’s Twitter has over 2,500 followers, kept up to date about our activities. Programme supporter Professor Brian Cox enthralled us with the Big Bang Lesson at Jodrell Bank; Alton Towers, BAA, Jaguar Land Rover and the Science Museum enhanced The Big Bang experience by providing money can’t buy prizes as part of our Big Bang Days Out competition; and we made it into Guinness World Records not just once but twice. With the help of over 250 enthusiastic pupils from a college in Birmingham, we created the world’s largest bubble as part of the world’s biggest practical science lesson. Thinking outside of the bubble has become par for the course in our efforts to grab the attention of potential young scientists and engineers.

The Big Bang Fair plays host to the finals of the National Science & Engineering Competition, culminating in a glittering Awards Ceremony. This prestigious competition celebrates the achievements of the country’s amazing young scientists and engineers, providing a real showcase for home-grown talent. The finalists of the Competition exhibited their projects alongside established science and engineering companies over the three days of The Fair, explaining their work to the thousands of visitors, highlighting the young talent we have in this country. 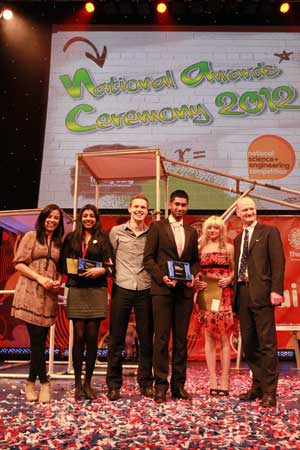 Three-hundred-and-sixty finalists took part in this year’s finals, with the Awards Ceremony hosted by BBC Bang Goes the Theory’s Liz Bonin and Science Junkie” Greg Foot. The Rt Hon David Willetts MP, Minister of State for Universities and Science, presented the UK Young Engineers of the Year and the UK Young Scientist of the Year with their prizes after they were singled out by a panel of world-class judges, which included Dr. Maggie Aderin-Pocock, Nobel Prize-winning biochemist Sir Tim Hunt, and the Science Museum's Inventor in Residence Mark Champkins.

Wasim Miah and Jessica Jones, from St David’s College in Cardiff, were named Young Engineers of the Year for their impressive portable device that combines electronics and mechanics to measure the intensity of foetal contractions, providing a clear and simple indication when mothers are about to go into labour. The UK Young Scientist of the Year, Kirtana Vallabhaneni, from West Kirby Grammar School, was awarded for her ground-breaking work helping to identify the harmful cells that cause pancreatic cancer. The media and industry attention these young people received as a result of their awards will provide them with a great platform for progressing their projects, and their science or engineering careers.

It’s hard to sum up the unique quality of The Big Bang Fair. If you compared attendees at The Fair to a football crowd, we’d be behind only Old Trafford and Arsenal in terms of capacity. To fully appreciate the size of the event and the energy that makes up the programme’s flagship event you really have to see it for yourself. The Fair is so much more than a fun day out. It presents science and engineering in a fresh new way and inspires young people to consider careers in these varied and vital sectors. The Fair challenges out-dated perceptions about science and engineering careers, giving young people a real picture of what twenty-first century science and engineering careers are all about – and it works.

You can take a look at The Big Bang 2012 for yourself on our YouTube channel: youtube.com/thebigbangfair

The 2013 Big Bang Fair will take place on 14 – 16 March at ExCel London. The Big Bang Near Me events take place nationwide all year round. For more information about The Big Bang programme go to www.thebigbangfair.co.uk

More in this category: Creativity in education: engaging pupils in STEM »
Login to post comments
back to top