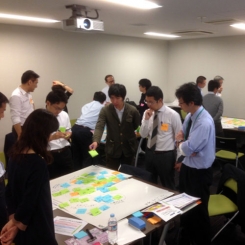 As these authors point out, creativity development is not new in Japan but it is being increasingly regarded as essential in education and training. Yet there appears to be a problem in that many people still find it difficult to exercise their creativity in practice. The authors suggest that the problem may lie in the lack of a creative mindset and they test this proposition with a series of sample groups – high school students, researchers working for a manufacturing company and members of the general public. The results are very interesting and point the way to future actions which need to be taken.

Cultivating a ‘Creative Mindset’ – Our Practice in Schools, Companies and Public Institutions in Japan

In Japan, education in creativity is becoming more and more important. Innovations have been considered increasingly important in Japan’s economy, and the Japanese Government has pointed them out as a major economic growth strategy. Along with that, creativity education is being more and more expected in various target segments. The government guidelines for secondary education have included the nurturing of creativity. Also it has started to be applied even in elementary education. Recently, a rising momentum in ‘Design Thinking’ has fueled the boom even more. Design thinking, started in the West Coast of the U.S., has spread worldwide. In Japan, it has been a hot topic for the last few years. In Japan, creativity education is not a new topic. It has been conducted for the last several decades and studied by many researchers. According to Takahashi’s study, there have been two different approaches: an individual approach and a systemic approach.

More in this category: « Fostering Individuality and Praise in Japan Creativity in Japan - an introduction »
Login to post comments
back to top