The Failure Files: Perspectives on Failure 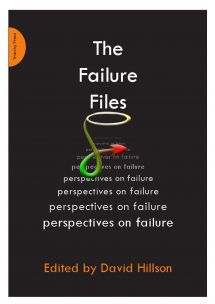 Failure is a word associated with negativity. The book, The Failure Files, is an intriguing attempt to answer how failure could possibly be considered as a good thing. It is a culmination of ideas on what failure is from a variety of disciplines and fields. These fields include psychology, history and sociology. The multiple contributions from various academics make an assessment on failure that aims to achieve nothing short of a large scale change in society.

The inspiration behind this book was the Royal Society of Arts and Manufacturers (RSA), Glory of Failure Project which was a discussion of the experiences of those who have suffered from failure and those who have gained from acquiring success through failure. The nearly 40,000 strong fellowship of the RSA helped propel this subject. In 2009 this project showed there was large scale interest in how a new attitude to failure could change different areas including government, corporate business and individuals. The book itself is an overall effort to pull all of this interest together. David Hillson (Editor) explains how to fail in order to succeed and how various studies can (and do) contribute to a better practical use of this new found knowledge. The ideas culminate in how they might be used for 'experimentation and creation', approaching society's ills with a fresh perspective.

The first part of the book sets out the contexts and the concepts of failure. The use of diagrams to explain how success and failure are essentially two sides of the same coin is summed up in the analogous use of the yin-yang symbol to explain that with great failure there is a small amount of success looming and vice versa. This part sets the tone and provides a template to set against the far-reaching academic discussions in the rest of the book.

The second section of the book is a large body of work considering the applications of this theory in practice. Essays (including ones by Mitch Sava, Jonathan Jewell and our own Co-Editor Marilyn Fryer) outline each academic's approach to failure through the lens of their respective fields. Discussions from personal failure, societal failure and failure in education are approached with convincing insight and all are certainly thought-provoking. Changes from one to others provide a kaleidoscope of interests to suit different perspectives. To explain all of these diverse theories briefly would not do them justice as they are well-researched and referenced to leave the reader with a distinct impression of a discussion that can have significant ramifications for society, including what failure might mean to governmental bodies that deal with the welfare of individuals every day.

At first how failure can be seen as a new topic of study seems trivial and inconsequential but with closer study this book encourages calculated failure. I will mention the example of inventors who will try and try again, their efforts may come to nothing but if they change tack and try something new they may just prevail. Failure is to be embraced. Success can always be achieved if we are prepared to fail. The conclusion of this book; 'failure is natural' and that without it we experience only half the lived experience. To conclude: it puts failure into perspective, reaches to the reader and says 'we can change what society is capable of and here is the evidence'.

More in this category: Imagine THAT! - Celebrating 50 Years of Synectics »
Login to post comments
back to top